The participation aims to investigate the ecology of recent and fossil benthic foraminiferal faunas at the Saya de Malha carbonate-platform bank in the western Indian Ocean. 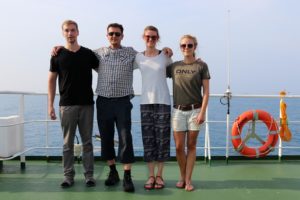 Foraminifera are single-celled organisms that live in large numbers either planktonic (floating in the water column) or benthic (living within and/or on top of the sediment at the seafloor) in the world’s oceans. Foraminifera build an external test that consist either of calcium carbonate or sand grains, which are glued together by an organic cement. Thanks to this tests, they can be transferred into the sedimentary archive, and also create so-called „oozes“ at the seafloor after their time of death. In large quantities, these deposited foraminiferal tests can even be rock-forming over geological time scales.

Fig. 2: Left panel: Foraminifera from a sediment sample of the south-eastern Caribbean (expedition M35/1), indicating oligotrophic to mesotrophic environmental conditions. The foraminiferal fauna is dominated by species that tend to live on top of the sediment. Right panel: Foraminifera from a sediment core (GeoB1023) off Angola. Due to the influence of high food fluxes the fauna is dominated by species that live deep in the sediment. Photos: G. Schmiedl, 2018/2019.

What can be investigated with benthic foraminifera?

The occurrence of specific species provides information about the foraminifera’s preferred living conditions with regard to the availability of oxygen and food within or on top of the sediments at the seafloor. Furthermore, the morphology of foraminiferal tests can be used to determine their adaptation to specific habitats. Variations may also occur within on the species level. For example, the pores in the test can become larger when oxygen is scarce in the ecosystem, in order to facilitate oxygen uptake by the foraminifera.

In summary, different foraminifera species are specialized to different marine habitats. Some prefer a high oxygen content and little food on the seafloor (oligotrophic), some a high food supply and little oxygen (eutrophic). According to their adaptability strategies, foraminiferal groups claim specific niches in the ecosystem. The knowledge about specialisation of individual species on certain habitats and environmental conditions, as we observe them today, can be used to investigate marine (fossil) sediment cores, in which their sequence offers us a timeline to the past.

In order to reconstruct past ecosystems, we use the principles of actualistic palaeontology, which assume that the adaptation strategies of individuals from a recent species are comparable to the behaviours of individuals from the same species that occurred in the past. For example, present-day foraminifera of the genus Globobulimina live in oxygen-poor environments, therefore we assume that they did the same in the past. 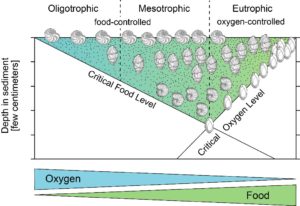 Fig. 3: The so-called TROX model (Trophic-Oxygen model) according to Jorissen et al. (1995), representing the linkage between the occurrence of individual foraminiferal species and the oxygen and food availability at the seafloor. Depending on whether oligotrophic or eutrophic conditions prevail, the species occur at different sediment depths. Figure: G. Schmiedl, 2019.

The study area, the Saya de Malha carbonate-platform bank of the Mascarene Plateau, is located around 10° south in the western Indian Ocean. At this site, several water masses of different oxygen content, coming from north and south, meet up. By investigating sediment samples from various water depths along the carbonate-platform slopes, we can comprehend and reconstruct the past behaviour of foraminifera with respect to the characteristic food and oxygen levels of the different water masses.

How to sample recent sediments?

On board, the uppermost 10 cm of the retrieved sediments are then sampled at intervals of 0.5 to 1 cm spacing, which is the average depth range where living foraminifera are appearing. The subsequent evaluation of the surface samples for their foraminiferal content enables to estimate their preferred living depth. Based on this, we are addressing the question, which species lives at which sediment depth under which conditions, and why? We are then using this knowledge to investigate long (fossil) sediment cores and to evaluate the occurrence of species that have lived at the platform slopes in the past. 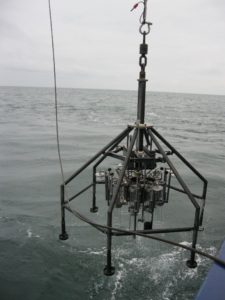 How did living conditions on the seafloor have changed over time?

Before we sample the approximately 6 m long sediment cores (obtained by the gravity corer) and start evaluating the fossil foraminiferal composition, we describe the sediment composition. Is there any noticeable stratification? What type of colours and grain sizes do we have in the sediment core? Based on this, we can get a first rough assessment of the climate conditions at the time of deposition. For the investigation of fossil foraminiferal faunas, the sediment cores are sampled at intervals of 10 cm spacing. These distances are sufficient to achieve a high temporal resolution and to reconstruct long-term climate trends. In this context, we are addressing the following question: What does the ecology of benthic foraminiferal faunas tell us about the development of ocean currents at the Saya de Malha carbonate platform?